In my wanderlusting life I’ve spent a lot of time in various countries and cultures, always taking it upon myself to be as aware and sensitive to whatever norms are typical and acceptable there. As the outsider I have always felt it is my responsibility to blend in and not offend. Inevitably, there have been times I’ve accidentally offended, like in Australia saying “what?” instead of “pardon?” Once told it was like nails on a blackboard, I started saying “sorry?” instead of “what?” I couldn’t bring myself to say “pardon.” It sounded horribly pretentious to my own ears, but I made the effort and found a compromise.

I love and respect our global cultural differences. Just this morning, however, I discovered that I feel differently about that within my own country. Staying in a hotel, I wandered down to the free breakfast to grab a quick bite before heading back upstairs to get some writing done. I was wearing workout capris and a loose-fitting t-shirt.

I smiled to a woman as I waited to grab my plate and didn’t get a smile back, which I just assumed was because she hadn’t had her coffee yet. I get it. We’re cool. After I grabbed my food I sat down at a table where I could look out the window, my back to most of the room.

When you eat sitting alone it’s that much easier to overhear other people’s conversations. Even easier when they’re not actually trying to keep their voices down. A man and woman were talking about how some women shouldn’t be allowed to travel alone. Saying that if she’d had a man with her he wouldn’t have let her go out in public like that. There were children here, for goodness sake! If she weren’t so desperate for attention she wouldn’t be alone.

I glanced around and realized they were talking about me! I was the only woman alone in the room. They were apparently offended by my exposed shoulder and tight pants. My t-shirt does have a tendency to slip a little off one shoulder depending on how I move. This is not something I pay much attention to because, well, who the hell cares? Apparently these people did.

As I looked around at all the women in the dining and lobby areas I realized that there were no tank tops to be seen anywhere, despite the fact that at 8:30am it was already eighty degrees outside. Every one of the women was with a man, and most had kids with them. I was, most certainly, the anomaly.

It’s probably relevant at this point to say that I’m in Utah. In a county that is between 75-80% Mormon. Now, as I finished my breakfast (not adjusting my shirt to cover my shoulder) and scrolled through a mental list of eviscerating responses, they shifted their conversation to the election (Fox News was on the TV screen in the dining area.) They were apparently reluctant Trump supporters, but inspired by some of the speeches at the RNC yesterday. They blamed a lot of the country’s current problems on a lack of decorum—not enough female modesty, too much swearing and porn—not enough God-fearing going on.

I felt my pulse quicken and heat rise to my face as a million arguments swam through my mind, vying for first place out of my mouth. But I refrained. I took a couple deep breaths and chose not to engage.

I was appalled and offended by nearly every sentence out of their mouths, but I decided that if I actively refused to make them comfortable by covering my (clearly overly sexy bare shoulder) I had to give them the freedom to spew ignorant rhetoric to one another. In this country, we’re perfectly free to do that.

I will respect every individual’s rights exactly as I expect my own respected, but I too have the freedom of speech. And personally, I find writing to be a better and more effective outlet for my frustration than confronting strangers in a hotel dining room. I am not in a foreign country. I am not responsible for kowtowing to anyone else’s beliefs because this is my culture. And yes, the majority of people surrounding me believe in a specific religious ideology that I do not ascribe to, but my rights as a fellow American are not limited just because they may be offended.

And yes, if I were to speak my mind I would certainly offend them on many, many levels. My goal is never to offend arbitrarily. But I have a really hard time stomaching ignorance, bigotry and hypocrisy. For people who are so invested in protecting their rights to believe and act according to their religion (hey there polygamist colony down the road!) I would have thought they’d be more sensitive to the fact that we all want that.

The last time I was near a Mormon temple I was protesting for gay rights outside the tax-exempt church that spent $190,000 to legislate against gay people having the right to enjoy their own most prized institution of marriage. (Did I mention I’m not a fan of hypocrisy?) 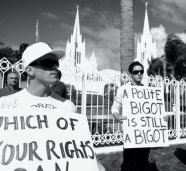 Outside the Mormon temple in San Diego

I would like to point out to people who feel their time is well-spent judging others and advocating limits to their right to live freely in a democratic society that history clearly shows the fallacy in that thinking. Following fear and bigotry has never led to peace or freedom for anyone.

While I respect your right to believe whatever you like and vote for whomever you choose, I suggest you do some self-reflecting and think about the kind of world you want to live in and leave behind for your children. It’s not about whether everyone behaves according to your preferred moral code. It’s a big picture.

What are the core values of humanity you respect and choose to advocate for?

If you want people to see the value in your moral code you could start by showing them love and kindness rather than judgment and shaming.

(And ps: stop telling women what to wear or not to wear. I didn’t tell you what to wear and I didn’t ask you what you thought of what I was wearing. The end.)