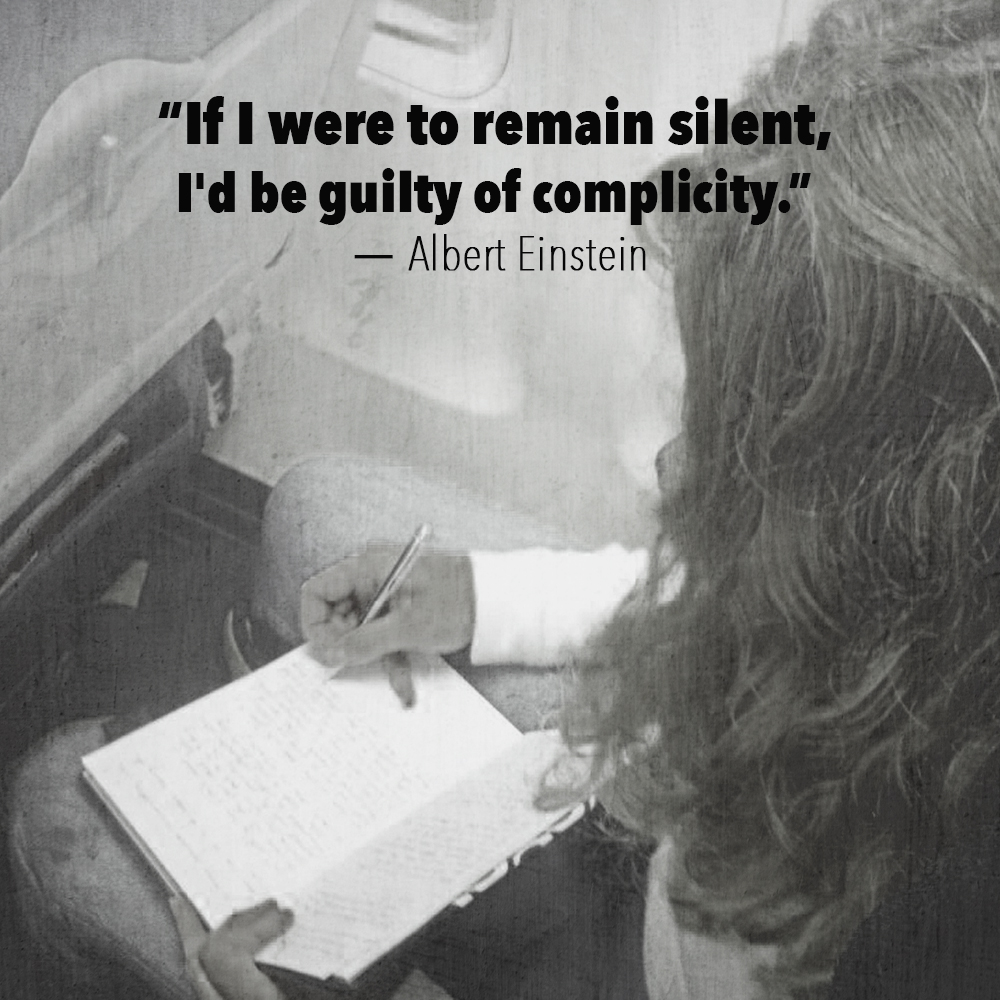 Usually I don’t write about my political beliefs, respecting that everyone’s opinions are equally valid and deserve to be part of the civil discourse. However, based on the current US presidential election I am making an exception. In my opinion, it is a moral choice rather than a political one to speak out.

The issue is not Republican versus Democrat. We are not voting on policy differences. This election is about humanity versus ego. Equality versus oppression. American idealism versus fear-mongering.

I’m sad and angry on behalf of all Americans who choose not to normalize demagoguery and bigotry. While I am just one small voice among 7 billion Earthlings, I refuse to be silent. Trump’s power is derived from collective silence—stupefied, terrorized or acquiescent. I will not gift him my silence.

It’s important to me that my friends around the world know this is not accepted by all Americans. This is not a standard we accept.

Stephen Hawking said recently: “He is a demagogue, who seems to appeal to the lowest common denominator.” This couldn’t be more true. No really, here’s the definition.

1:  a leader who makes use of popular prejudices and false claims and promises in order to gain power

2:  a leader championing the cause of the common people in ancient times (Merriam-Webster)

As laid out by Michael Signer (quotes in italics) for The Washington Post, Trump meets all four criteria that make a textbook demagogue.

First, a demagogue imperils his country in the international arena.

-Trump “has suggested that he’d order the U.S. military to kill families of Muslim terrorists and institute interrogation techniques worse than waterboarding, itself widely condemned as torture. Torture and retaliatory executions are both war crimes under international law.” (Victor Morton, The Washington Times)

The second danger is that the demagogue will surround himself with incompetent and dangerous advisers.

-While he hasn’t actually named any advisers in his would-be-presidency, here’s how he answered Jake Trapper’s questions on CNN (February 28th) regarding David Duke’s endorsement:

Trapper: Will you unequivocally condemn David Duke and say that you don’t want his vote or that of other white supremacists in this election?

However, according to Politifact.com, “As fellow fact-checkers at the Washington Post and Factcheck.org have pointed out, Trump knew enough about Duke to denounce him several times over the past two decades.”

Considering Trump is most passionate about Trump (that’s why he puts his name on everything from buildings to steaks,) it’s safe to assume he’ll fall prey to his own narcissism, choosing his own best interest over the country’s. Just as he has done in filing his taxes.

“We have somebody on the one hand who has lawyers saying the value is less than $2 million while at the same time he’s claiming it’s worth over $50 million,” Levenberg said in an interview. “And we have seen no revenue or expense forms. It can’t be that he is making all this money but saying he doesn’t have to pay taxes on it. That’s less money for the children in school, less money for learning.” (Ben White on Politico.com)

Fourth, demagogues like Trump threaten dissenters in an effort to silence them.

Trump has threatened to sue everyone from reporters to artists to comedians for saying (or painting) things he doesn’t approve of. His thin skin and egomania make this trend particularly disturbing.

Trump’s objective here is clear, several campaign strategists and political reporters observed: To discredit the people who call attention to his lies, his contradictions, his lack of transparency and the less seemly aspects of his history.

“Why attack media?” asked Michael Barbaro of The New York Times. “So you can keep saying they are ‘discredited’ when tough stories come out. It’s deliberate attempt at inoculation.” (Dylan Byers and Jeremy Diamond for CNN Money)

Article II of the Constitution specifies that the president has two primary job functions: to serve as chief executive of the federal government and to serve as commander in chief of the armed forces. (OurWhiteHouse.org)

Some of you may still be thinking, “I just like that he says what he thinks—that he’s not part of the establishment.” And, while I understand the desire for an outsider, there is a considerable difference between one who is not beholden to big business and one who is truly for the people.

Think about Trump, the president. Not as a position held in a movie or on television, but the actual day-to-day reality of Trump being the leader of this country. Of brokering peace talks. Of understanding (let alone setting) foreign policy. Of developing educational policies. Having authority to send troops into combat. I don’t know about you, but I can’t help it. I’m picturing Idiocracy’s President Camacho.

Earlier this year I blogged about  Breaking up with the Patriarchy. This election feels a lot like the awful relationship that just wouldn’t end. He’s not getting it. Everyone knows we deserve better than a narcissist who tells us what he thinks we want to hear before doing whatever the hell he wants. As a female, I hear him say he “cherishes” women and then follows it up with things like this:

That’s right, a man shouldn’t be held responsible for sexual assault when he’s presented with a female in combat! Thanks, Donald. I do feel cherished. For more, The Huffington Post compiled this handy list of 18 things Donald Trump has actually said about women. (Spoiler Alert: they’re all disgusting!)

But he’s an equal opportunity bigot. So don’t feel left out if you’re not a woman. Chances are, whatever kind of human you are, Trump’s got an offensive quote for you too. Here is a list of 199 gems compiled by Politico.com.

Even if you belong to that very thin sliver of humanity not blatantly offended by things Trump says, there’s still a practical reason for you not to vote for him if you do, in fact, want America to be great.

They [Demagogues] undermine the stability of a “by the people” form of government particularly by turning “the people” against each other. They represent a danger not just to electoral outcomes or political parties, but to democracy itself. –Megan Garber, The Atlantic

I understand that people are scared. We live in an uncertain environment. There are terrible things happening we don’t understand and don’t know how to stop, like mass shootings and terrorism. There is a dwindling middle class caused by economic disparity. There is corruption in healthcare, politics, banking, food production and many other areas. I get it. It isn’t easy to hold all that on one side while on the other we try to attain happiness and personal success.

But the world is not one dimensional. It’s complex. No issue has a singular cause or solution. No one group of people is to blame now or at any point in history. It is all collective. Causally and consequentially. We share a universe, a planet, a country, a leader. And a history.

This is that point in history when we collectively decide. We get to vote. So use that right. Protect that right. It’s painfully obvious which side of history Trump is rocketing his way toward. The only question is: Do you want to be the one on that exploding ship with him or cutting the fuel supply before it leaves the ground?

One thought on “The Politics of Silence”